We've been busy with a lot of updates and upgrades to the systems that run ClearCheckbook and our mobile apps. This blog post will cover a lot of those changes and how they affect ClearCheckbook.

1. DNS / SSL Updates - The biggest change this week has been switching DNS servers and SSL certificates. Our old DNS provider was discontinuing service so we found an alternative that also has some really cool features such as automatic asset minification and caching which have cut down bandwidth by over 50% daily.

Since we switched DNS providers it also gave us the opportunity to update the way we handle SSL certificates and serving our site over HTTPS. This fixed some of the redirect issues some people were experiencing when entering http://clearcheckbook.com. Now all urls are redirected properly to https://www.clearcheckbook.com. These new SSL procedures also brought up a couple unexpected errors though, which brings us to...

2. Android app connection issues - When we switched DNS servers we started receiving messages from some Android app users saying the app would no longer connect. At first we thought it was simply a DNS propagation issue but after a few days of people still having problems, we finally figured out that it was due to the new SSL certs that use the latest ciphers not supporting some legacy Android versions and really old versions of Windows. Once we discovered this we were able to make some changes to the way SSL certificates are handled and provide an older certificate for these antiquated systems, while still serving the most recent and secure certificates to modern day technologies.

5. Updated Pie Year Charts - We realized that our old 'Pie by Year' charts weren't that helpful. They were small and didn't show all of your spending in a very intuitive way. With the update to the Pie Year Charts, we now use one large chart that shows both parent and sub categories on the same report in a very nice and clean way. Below the report we also have a breakdown of each of your categories with total spending for the year.

This new view of your spending for the year is a great way to help figure out where you can cut back on for 2017. We also recommend taking a look at the chart and using the information from 2016 to help you set your 2017 budgets. The Pie Year Chart is available to all premium members and can be found by clicking on 'Reports' at the top of the page, then click on the 'Categories' tab and finally 'Pie by Year'. 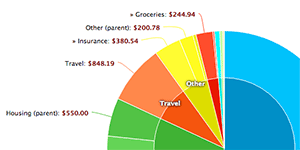 We want to apologize to anyone that was affected by the DNS/SSL legacy issues but those have all been sorted out and we hope you're able to connect without any issues now. There's been a lot of activity behind the scenes lately and soon you'll start to see some of that make its way up front in the way of the mobile apps being updated (iOS) and overhauled (Android).

If you have any questions about these upgrades or simply want to leave us any comments or suggestions, please let us know!